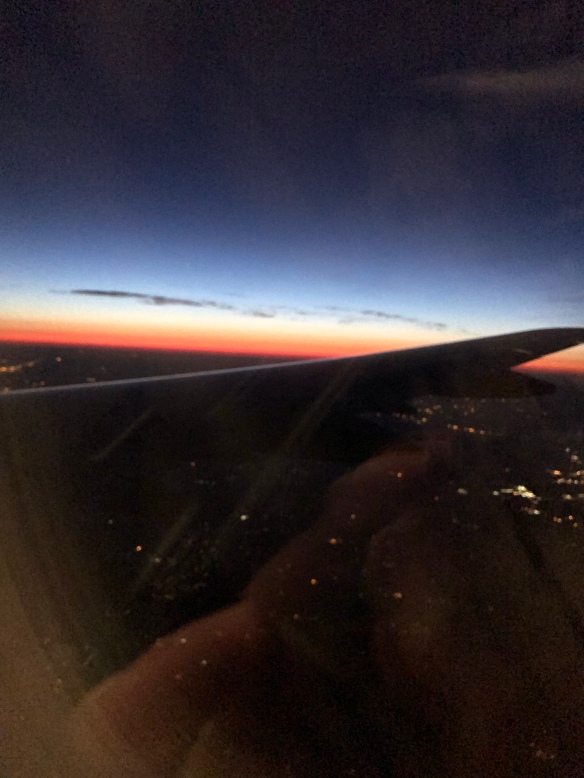 This blog has been quiet lately, but my nest has not been. My just-turned-23-year-young daughter (one of the twins) landed the kind of job we’ve been praying for since graduation last May. I rejoiced alongside her four weeks ago that God answered our prayers BIG, but was stunned that the job was 7-states and 16-hours away (by car). Sigh.

I write the beginning of this post from the airport concourse, waiting for my flight back to the nest.

The last month has been slammed at work, then crazy at home with planning, packing and preparing. Now, this huge, life-altering event is behind us. The wheels of my return flight squeaked as they tucked under, making me want to tuck my own feet under me and squeak a bit about what a huge hole there will be in my nest…

I had finally adjusted to the bustling activity and non-stop-in-and-out of the twins returning home from university last May. Although my youngest is still away at her school, the nest was no longer a silent space. We were literally back to “Mommmmm!” at the bathroom door the second I started the shower. Whenever I felt annoyed at something, I mumbled thanks that my nest was alive with life.

My saver-daughter independently purged years worth of clothes and shoes, and thinned three giant bins of cards and notes into one. She even found her saved baby teeth and notes to the tooth fairy (“please leave my teeth and thank you”). Piles to be packed and donations to be given away were strewn throughout the house and her room.

The Jonas Brothers. One Direction. Taylor Swift. All decorations from her youth were recently replaced with fresh paint, a new travel theme – complete with photographs of her many adventures in travel. She had wisely turned down a job a Boston a couple months ago and arrived back home ready to nestle in…accepting that it could be a lonnnnnng wait for the “right” opportunity. God has such a sense of humor.

Her and I had just hung the last of enlarged photos from her trips and our summer vacation in Scotland and Ireland when the interviews began with her current job. The room we just completed was quickly deconstructed with all the décor in boxes for her first apartment.

While the mess strewn everywhere, she began wrapping fragiles in what we wrapped her in 23 years ago in the hospital. All of us parents have these exact same, thin, worn wraps somewhere in our homes and it was too much for me when I saw them.

This baby girl is my independent one. We have a favorite family video of her loudly announcing at 2 1/2 years old, “I can do ittttt!” She did not want help. Her independence is part of her. While this is how she can go to a place where she knows zero people, this quality has also (somewhat) eased my Mama-pain over her departure from the nest.

Funny how she’s my most independent one, but she’s also the only one who still sleeps with the same “dollies” at 23 that she did at 2yrs old.

These near stuffing-less treasures went with her far away.

Though Google and Zuckerberg and Apple’s leadership were decades ahead of us in copying and saving our so-called “personal” data – long before society bothered to contemplate if snaps and posts and emails were being saved in massive data centers – and I really go off on a tangent about all of it :), I still embrace certain technologies that keep my babies and I connected. I wonder how I lived without Snapchat to show my kids something at a store. I’ve always refused to use FB despite the disappointment of my friends, but I spend plenty of time on FaceTime with my kids.

Even more than when the twins were at their universities and we talked every day, “live” technologies have officially become a greater blessing during my daughter’s first full week on the job. Snaps of her new office help me picture her there. Snaps of her food make me laugh since she loves to eat! FaceTime on lunch breaks and after work help us still “do life” together as much as we can with 7 states between us.

Though my independent one, she was quick to confirm that it would only be 7 weeks until I arrive for Easter weekend….”you are coming for Easter, right Mom?”

Well…who can say no to that invitation!?